Over the past few months, I’ve had incredible writing opportunities come up and I’m still so blown away by the support you all have shown me and this page. As a mother to a feisty toddler, struggling when chronic illness and an emotionally exhausting job are added to the mix, it should come as no surprise that I felt overextended.

Thankfully I found this amazingly inspiring post by a fellow writer. She puts into words all the thoughts and emotions I was feeling but couldn’t quite express. Hop on over and check out the insightful perspective she offers on the perks of taking a break!

My dear friend, Jasmine, of Emilee Plays | See June Play has graciously chosen to share her premature birth story. Below she writes about her experience on what would have been her youngest daughter’s due date.
She tells beautiful stories through photo essays and today’s story is no different.

Today is my due date.

Today would have been the day I met my daughter, June. Instead, I met her two months ago. Never could I have imagined that I would give birth to a preemie, but I did. I’m not going to lie and say I don’t feel a little bitter about it, or that I don’t wish things could have been different.

I could have done without the NICU stay, the worrying, and the uncertainty. When I start getting completely caught up in my thoughts about this day, I remember: June is two months old, officially a newborn, and set to get her vaccinations on Thursday.

I can breathe a little easier and I can live a lot more with my daughter.

On her due date

If you’re anything like me, you have a love/hate relationship with all things internet. On one hand, I need it for legitimate things like work emails and Googling “how many blueberries are too many for a toddler to eat.” On the other hand, I can’t keep up with my social “responsibilities” – making sure to like, comment on, and share every cute baby pic and event invite.

In short? Being plugged-in leaves me feeling burnt-out.

Sometimes it gets to be too much

As the aforementioned GIF states, I decided to quit! Just for a weekend, though. After all, the world needs to know exactly what my meals look like.

Since I had to get up early Saturday morning for a bridal shower three hours away, I decided on Friday night that I was going to keep my internet-ing to a minimum over the weekend. Guys, I’m serious. I really kept it to a minimum!

I didn’t even play Candy Crush.

Aside from snapping an Instagram pic while stuck in traffic, I wasn’t particularly connected on Saturday. It was actually pretty liberating! Instead of making sure I captured moments on camera, I lived them. I left the picture-taking to the experts. One perk of living in 2015? You can bet that someone will be taking and tagging pictures at whatever event you’re attending – so you’re free to unplug.

Thankfully you can also *untag* yourself, too

Maybe I’m an oddball here, but sometimes I feel a weird sense of obligation to scroll through my news feed. It’s one half FOMO (“fear of missing out,” in case you didn’t know) and one half politeness. I mean, I know the where the salad fork goes, how to address a letter to an employer, and when to wear white – but what’s the etiquette for socializing online?

I’m assuming this isn’t it?

I’m often nervous that my inconsistent work schedule prevents me from maintaining valuable relationships in “real life.” In a way, the internet helps me feel like I can stay in touch with just the click of a button. On the flip side, I worry that if I don’t interact enough online, my social life will reap the consequences.

Thankfully my weekend mini-sabbatical didn’t seem to have the negative impact I had feared.

In the end, I don’t know how often I’m going to try and disconnect, but the idea isn’t as anxiety-inducing as it once was. I’ve come away feeling like I was more present and involved in real life social situations and less concerned about missed opportunities on social network sites.

After going to a protest against animal captivity at SeaWorld this weekend, I realized something: I’m really freaking opinionated. Okay, that’s a lie. I’ve always known it. But putting that lovely quality in the framework of motherhood somehow shifted my perspective a little.

It’s not like when you’re in college where it’s cool – and even admirable – to be super outspoken about your beliefs. I’m in Grown Up World now (which sucks, by the way). In Grown Up World, being a little left-of-center can land you in hot water and cause irreparable damage with your boss, your family, OR WORSE, your mommy friends. So here are five reasons why I’m unapologetically “That” Mom.

5.  Because I Really Am Just That Passionate

Okay, I’ll admit it. I’m the person on Facebook who is clogging your news feed with petitions, infographs, and fact-filled rants. I’ve probably lost FB friends because of this, but honestly I count my friends in real life, not in social media. Maybe my opinions rub people the wrong way, but I promise it’s not my intention.

I’m not posting about a polarizing issue because it’s “trendy” or for some strange sense of self-satisfaction. I’m doing it because I genuinely care about the cause. Animal rights, the LGBT+ community, gender equality – these are all things that are near and dear to my heart, so I get a little fired up about it. But I’d rather be a spicy meatball than a bowl of oatmeal. (Bonus points if you get the Degrassi reference.)

One of the things that freaked me out the most about becoming a parent was knowing that this tiny human was going to learn from watching me. I guess you could say my lifestyle would fall in the alternative or progressive category. In general, if everyone says “a” then I have a compulsion to yell “b” on principle alone. So what kind of example am I setting with my heretical disposition?

God save us all!

Hopefully my actions will show my child that it’s good to question the status quo, it’s honorable to be a voice for the voiceless, and if you believe something, you need to be able to explain why. Even if I disagree with my son one day over something, it’ll be a proud moment when he challenges me and can back up his reasoning.

3. Because I Won’t Be Young Forever

It’s not just my opinions that cause me to stand out; it’s also my exterior. For those of you who don’t know me in real life, I never have the same hair color for more than a few months. I get a lot of looks and plenty of judgment because of that. Whether it’s a stranger in the supermarket or a more conservative mom at the park, people like to make assumptions about chicks with crazy hair.

But I’m okay with getting those kind of stares. Why? When I’m older I probably won’t be rocking the punk look because I either won’t have the time/energy or I just won’t care as much. So for now, I’m enjoying this freedom of expression. On a touching side-note, I made a deal with one of my developmentally delayed students that I would dye my hair her favorite color (hot pink) if she agreed to try her very best. It worked 😀

2. Because Of That Whole “Birds Of A Feather” Thing

Despite the fact that getting into debates has (unintentionally) burned some bridges with former friends, I’ve also found some of my best friends that way, too. Nothing brings people together like passionately standing up for the same thing. When I speak about polarizing topics on a public platform, people seemingly can’t help but to share their opinion, too.

For me, I’d rather know exactly what people think about me – good or bad – than to be surrounded by a bunch of potential frenemies. But I’ll tell you one thing, when you do find your tribe, they will stick by you through thick and thin. So I’ll take the occasional hater if it means I get to find some kindred spirits in the process.

At the end of the day I don’t always have a rational reason for why I swim against the current. Sometimes my obstinate nature helps me overcome challenges and sometimes it makes people feel like I’m sandpaper on a sunburn. Yet I don’t really know any other way to be. So far that’s served me pretty well, though.

I don’t ever want my stubborness to cause difficulties for my son. And I’ve really been trying to make a go of the whole “be diplomatic” thing. For his sake I’m attempting to pick my battles and just let some disagreements go. It’s more important that he has a healthy social life than for me to win an argument that would risk alienating him. I can’t predict the future, but I hope that when I cause my son embarrassment, it’s just because of some really bad dance moves.

In my teens and early twenties, June meant pool parties, cookouts, beach days, and all the action movies and popcorn a gal could handle. Things are just a tad different with a toddler. And by “tad” I mean “EXTREMELY.”

Now life is broken down into BB and AB – meaning life Before Baby and After Baby. Do any of these scenarios sound familiar to you?

Share in the comments below how YOUR summer has changed now that you’re a mom! 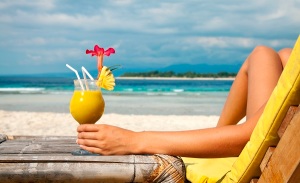 Were we really ever this carefree?

All you carried with you was a towel, wallet, change of clothes, and maybe a phone (depending on what year we’re talking). You really didn’t need to plan before going; it was usually on a whim or just because the forecast was sunny. They were simpler times.

All that’s missing here is the inconsolable crying

In addition to the baby bag basics, you need waterproof diapers or backup undies (in case of an accident), more towels than you’ll end up using, various toys, sunscreen, water, snacks, an umbrella (if you’re there for a while), and you’ve already accepted that your car will be sandy for days. I’m not even gonna discuss the meltdowns that could happen while you’re there!

Going to the Movies 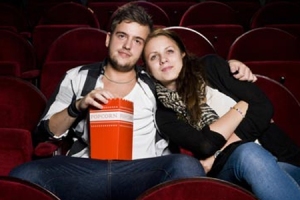 “Yeah! When does it start?”

“Cool. Lemme just grab a hoodie in case it’s chilly in the theater.”

Disclaimer: The family in this picture does not accurately represent real family movie nights.

“Yeah! When does it start?”

2nd Disclaimer: I never went to a party this cool looking 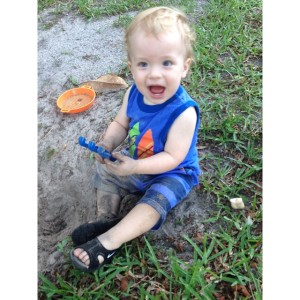 3rd Disclaimer: This is my son and I can’t get mad when he plays “archaeologist”

Whether it’s sticky, watermelon covered hands or the spot in the yard that will never grow grass again because your child is an aspiring archaeologist, outside time is never quite the same with kids. Sure there are boo-boos from outdoor adventures and messy faces covered in God knows what. But guess what? All the “oopsies” make for great memories. Plus, when you’re outside, you can just hose ’em down 😉

SO! Did I leave anything off the list? Here’s hoping your summer will be off to an ant-free, nap-filled, smooth start!